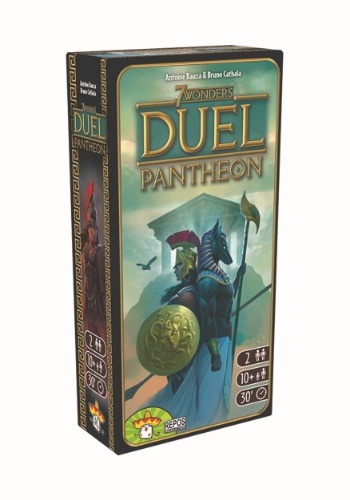 Building a civilization takes moxie! After all, you need to create a world-class culture by adding statues and a pantheon. You also don't want to neglect your society's scientific advances. You also can't neglect your military! If you have a weak military, then you might find yourself under attack by a rival, neighboring civilization. Also, which sort of deities will your people worship? You'd better have the courage to chose right if you want your civilization to be the best one!

Well, that's the important question you must answer when playing with the 7 Wonders Duel: Pantheon Game Expansion! Anubis, Zeus, Enki, and more could give your civilization a boon.

This 7 Wonders expansion pack requires the core 7 Wonders: Duel in order to play, so make sure you have that before you pick up this expansion. This particular expansion adds a pantheon of god cards that can give you special bonuses as you play the game. It adds a completely new element to the core game, infusing new life into the game for veteran players. The game also comes with new cards and a handful of new tokens to enable the new gameplay mechanics.

$24.99
Item # DEESEV09 | Write A Review
Items Included
Product Highlights
Product Description
Questions & Answers
There are no questions for this item yet. Be the first to ask a question!
Ask a Question
Reviews Write A Review