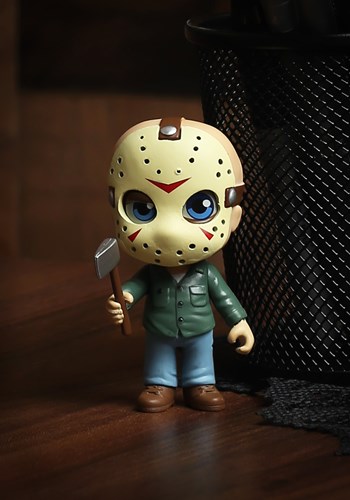 We hear you're headed off for a weeklong camping trip with your friends at a lake. Fun! Wait...did you say at Crystal Lake? Uh...good luck, guys. You're much braver than we are.

You may want to take along a few things for protection. Along with weaponry, we'd suggest this 5 Star: Horror—Jason Vorhees Figure. Because here's something most people don't know: even Jason is scared of himself. His own likeness makes him cower with terror. What can we say? Years of isolation and gruesome killings on his hands have deteriorated his mental state. So this little figurine may just prove invaluable in keeping you safe out there. But seriously...good luck. You're going to need it.

By Funko, this 5 Star figure is part of their Horror series, which features Jason, Freddy, Chucky, and Pennywise. Whether you're into collecting all of them, or you're more of a one-killer kind of collector, this Jason doll takes the cake! He stands a 3.5 inches tall, but believe us, that may be enough to save your life at Crystal Lake—just look at the detail! He's got a movable head and arms, and a bloody machete and ax that fit nicely into his gruesome little hands.

So, we're definitely questioning your choice of campgrounds, but not your choice of collectibles. You seem to have an eye for quality and style. Let's just hope you keep that eye—both of them—and don't get harpooned out there!

$11.99
Item # FN34012 |       Write A Review
Items Included
Product Highlights
Size Chart
ST
Inches Centimeters
Product Description
Questions & Answers
There are no questions for this item yet. Be the first to ask a question!
Ask a Question
Reviews        Write A Review2 Total Reviews
Five Stars
By Pauline / June 22, 2019
Was this review helpful to you?YesNo
Five Stars
By Current Customer / December 22, 2018
Loved what I bought!
Was this review helpful to you?YesNo
Write A Review